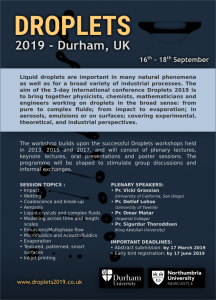 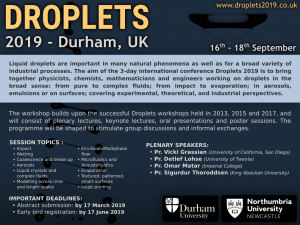 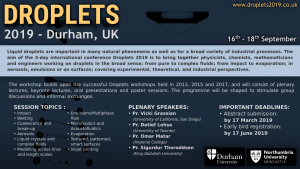 Dr. Sigurdur Thoroddsen is a Professor in the Physical Sciences and Engineering Division at King Abdullah University of Science and Technology (KAUST), which he joined as a founding faculty in 2009. Thoroddsen received a BS in ME from his home-country at University of Iceland, followed by MS in Civil Engineering from Colorado State University and PhD in Applied Mechanics from UC San Diego in 1991.

He started as an Assistant Professor in Theoretical and Applied Mechanics at the University of Illinois, Urbana-Champaign. Then became an Associate Professor in ME at the National University of Singapore, before joining KAUST to set up the High-Speed Fluids Imaging Laboratory, with a focus on experimental fluid mechanics with high-speed imaging of free-surface flows, such as drops and bubbles, focusing on splashing, coalescence and singular jetting.

Thoroddsen has authored 150 publications in international scientific journals, describing his work on turbulence, coating flows and granular jets, in addition to his studies of the dynamics of drops and bubbles. His images and videos of flow phenomena have received six separate Gallery of Fluid Motion Awards. He was elected a Fellow of the American Physical Society in 2012.

His research interests are in multiphase flows, analytical techniques, numerical modelling, and data-centric methods with applications in oil-and-gas, fast-moving consumer good, and manufacturing. He has published over 230 refereed papers with over 6500 citations and an h-index of 46 (GS).

He is co-Editor-in-Chief of J. Eng. Math., and received >£35M in funding from EPSRC, and industry including the £5M EPSRC Programme Grant, MEMPHIS, to develop predictive tools for multiphase flows. OKM is also the Director of Transient Multiphase Flows (TMF) consortium on flow assurance, and Deputy-Director of an EPSRC CDT in Fluid Dynamics across Scales.

Current research focuses on the physical chemistry of environmental interfaces include indoor surfaces, heterogeneous and multiphase aerosol chemistry, climate impacts of atmospheric aerosols and environmental impacts of nanotechnology.
Professor Grassian is a Fellow of ACS, RSC, AAAS and APS.

She is the recipient of several national and international awards; the 2018 Chemical Pioneer Award from the AIC, the 2014 RSC John Jeyes Award and the 2012 ACS Award for Creative Advances in Environmental Science & Technology. Most recently, she was named the 2019 recipient of the William H. Nichols Medal from the ACS NY Section.

Detlef Lohse studied physics at the Universities of Kiel & Bonn (Germany), and got his PhD at Univ. of Marburg (1992). He then joined Univ. of Chicago as postdoc. After his habilitation (Marburg, 1997), in 1998 he became Chair at Univ. of Twente in the Netherlands and built up the Physics of Fluids group. Since 2015 he is also Member of the Max Planck Society and of the Max-Planck Institute in Göttingen and since 2017 Honorary Professor at Tsinghua Univ., Bejing.